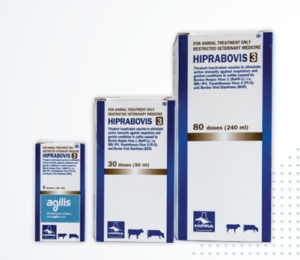 All three viruses are widespread through out NZ dairy herds and can act singularly or together
synergistically to cause illness and ill thrift in young replacement stock. Outbreaks of respiratory disease
may lead to large growth checks in calves making it difficult to attain the necessary weight gain to
reach the all-important target live weights by mating.
Hiprabovis 3 comes in three convenient pack sizes, 80, 30 and 5 dose bottles so left-overdoses are a
thing of the past. Calves can have their first dose from 4 months of age and should be boosted 3 weeks
later. Injection can be intramuscular or subcutaneous and following the booster vaccination offers 12 months protection. 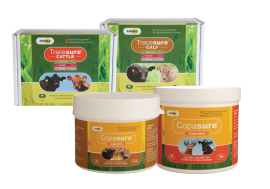 Tracesure is a slow release rumen bolus that releases Selenium, Iodine and Cobalt daily
for up to 6 months. It supplies these trace elements via leaching technology which is best
described as sucking the juice out of an ice-block. The elements are released in a consistent
manner as surface area remains consistent unlike that of an eroding bolus. With eroding
boluses, the surface area changes as the bolus erodes hence the amount of trace element
released may also change. Not so with the leaching technology of Tracesure.
Using Tracesure removes the need for drenching, injecting, extra yarding yet you can have confidence
that your calves are getting a consistent daily dose of the minerals they need. Tracesure for cattle
come in two sizes, trace sure calf and Tracesure. Tracesure calf delivers daily 3mg Cobalt, 1.5mg Selenium, and 9.5mg of Iodine while
Tracesure cattle delivers 3mg of Cobalt, 3mg of Selenium and 19mg of Iodine daily for up to 180 days or 6 months. Tracesure cattle is
recommended in cattle from 150-400kg in liveweight. Above 400kg of liveweight, two boluses are required.
Copper is not provided in tracesure but rather is provided in a separate gelatine covered capsule full of Copper Oxide Wire Particles (COWP) Copasure. Copasure comes in two sizes for cattle and deer, 12.5g and 25g with a 2g and 4g available for sheep and or weaner deer. Copasure can be given with or without Tracesure as the delivery guns are designed to fit both a Tracesure bolus and Copasure capsule so that only one treatment is required. Giving copper orally is a safe and effective option for ruminants compared to injection with the gelatin capsule dissolving in the rumen releasing the copper oxide particles which get caught up in the folds of the stomachs of the animals eventually dissolving slowly in the acidic abomasum.
In summary, using Tracesure and Copasure your animals are receiving 5-6 months of selenium, cobalt, iodine plus copper without relying on variable dry matter intake or water systems. Having sustained continuous delivery allows your young stock to grow unchecked allowing them to maximise their future potential.

The goal in young stock grazing areas is to grow grass and provide the perfect environment for parasites; shade, moisture and warmth, conditions which allow parasites to thrive. Constant grazing with the same species allows numbers to build up from early in the season to peak at high levels early autumn. Regular drenching intervals help to control the parasite burdens but still young stock may struggle. The problem is that in between drenches young cattle are ingesting immature worms (L3 stage larvae) that go on to mature into adult egg laying worms in approximately 21 days. These L3 larvae tend to have production limiting effects as they cause gut damage which may directly or indirectly lead to appetite suppression. The end result is that maximal growth rates may not be attained. A relatively new product on the market called Alpheus drench capsules is designed to ease calves through this difficult period. The Alpheus capsules are a slow releasing drench capsule that floats in the rumen, releasing abamectin for 125 days which kills incoming larvae as they are ingested thus preventing them from causing gut damage. Parasites tend to be easier to kill in their L3 larvae stage than as adult worms. The capsule comes with an oxfendazole/ levamisole combined primer drench tablet to kill all adult worms at insertion leaving the abamectin release to carry on killing any ingested larvae. At 125 days the capsule payout ceases abruptly ensuring no sub-lethal tail occurs. We do advise ensuring efficacy by egg counting at day 50 and 100 post insertion. We have seen massive improvements in young stock growth rates with these capsules as when you take the larval burden away the calves only have to eat and grow.

A woman goes into Walmart to buy a rod and reel. She doesn’t know which one to get so she just grabs one and goes over to the register. There is a Walmart “associate” standing there with dark shades on. She says, “Excuse me sir, can you tell me anything about this rod and reel?” He says, “Ma’am I’m blind but if you drop it on the counter I can tell you everything you need to know about it from the sound that it makes.” She didn’t believe him, but dropped it on the counter anyway. He said “That’s a 6′ graphite rod with Zebco 202 reel and 10lb. test line. It’s a good all around rod and reel and it’s $20.00.” She says, “That’s amazing that you can tell all that just by the sound of it dropping on the counter. I think it’s what I’m looking for so I’ll take it.” He walks behind the counter to the register. And in the meantime the woman farts. At first she is embarrassed but then realizes that there is no way he could tell it was her – being blind he wouldn’t know that she was the only person around. He rings up the sale and says, “That will be $25.50.” She says, “But didn’t you say it was $20.00?” He says, “Yes ma’am, the rod and reel is $20.00, the duck call is $3.00, and the catfish stink bait is $2.50!”

The team at Agilis are pleased to announce we now have a new technical sales representative based in the Waikato covering Waikato and Bay of plenty region. Angela Quinn comes to us with experience in the dairy sector and will be a great asset to the Agilis team. Also, behind our sales and technical team we now have Jo Bradford our Marketing Specialist to keep us all in line and up to date with new technologies! This will help us all. Welcoming in summer; December/January we look forward at the importance of giving calves the next step in the right direction towards better health quality and performance. Our knowledgeable and experienced team look forward to working with you and your staff to provide you with the information and support needed. Don’t be afraid to contact us if you have any suggestions for new products to introduce into the New Zealand market place. Talk to your local Agilis rep about how our 4 key products can work together or separately to give your young stock a head start.